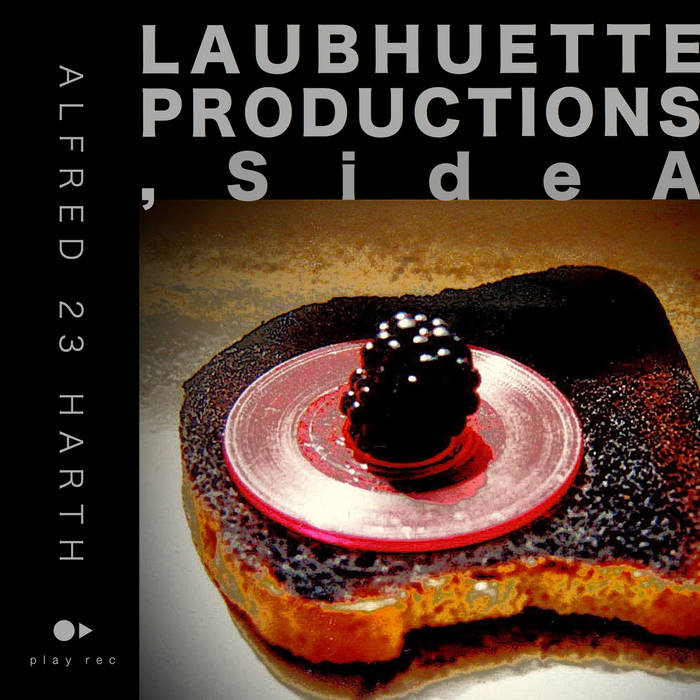 In 2002 I installed the LaubhuetteStudio in Seoul and started a blog Laubhuette Productions (LP)
http://laubhuettestudio.blogspot.com

In 2008 the studio moved nearby the border to North Korea and I gave it a name LaubhuetteStudio Moonsun. The compilation Laubhuette Productions Side A contains about half of the best-of from those years of new solo productions besides my band activities. Some musical material is even much older, originating from my out-of-print LPs of my early years in Germany, which I started using on turntables in 1997 together with German poet Paulus Böhmer who was reading his texts Wäre Ich Unsterblich, Könnte Ich Leben?. Later in 2015 I made a re-montage of parts of this original radio production as to be heard in Aus alter Zeit (1) and in Wenn ich…(8). Spagat (2) was recorded in the mid of the 00years and mastered in 2009. It is taken from the album Laub (LP M 16). akupunktur in grün (3) is from the album with the same title from 2002 (LP 03). Tracks 4 - 7 are taken from the album @ blankies end (LP M 28), recorded in 2009, mixed in 2010 at LaubhuetteStudio Moonsun.

Around the millennium change Alfred 23 Harth (A23H) shifted his working focus from Frankfurt/Main to Seoul. He founded the LaubhuetteStudio and put out a solo composition CD series Mother-of-Pearl of five items about Korean themes during the years 2003 - 2005 including sound sources from diverse Korean musicians.
Already in the mid 90ies Japanese guitarist Otomo Yoshihide had sampled Harth’s work about the Pekinese Opera from 1984, together with his former duo partner Heiner Goebbels, for a CD of the group Ground Zero. Since early 2004 Harth became a steady member in Otomo Yoshihide’s ensembles for about five years. In 2007 he started the trio Taste Tribes with Guenter Mueller and Hans-Joachim Irmler, and the quartet 7k Oaks with Luca Venitucci, Massimo Pupillo, Fabrizio Spera from Rome. In 2009 A23H added a duo Gift Fig with American composer Carl Stone and extended his Asian working radius to China in 2011, forming the Shanghai Quintet together with Xu Cheng, Jun-Y Ciao, MaiMai, Yi Tao. Again in 2013 he toured the Pacific Rim together with Torsten Mueller, and began a mixed media series work including John Bell with whom he toured New Zealand in 2017. The same year A23H recorded a duo album with Nicola L.Hein in Tokyo and formed a new band Revolver 23 together with Hein, Marcel Daemgen, Joerg Fischer touring in Germany and a festival in Moscow in 2018. Harth released more composition CDs.
Over the years Harth took part in several group exhibitions in major Asian museums to show his art installations and photo/video works. He edited a book Moondada with his drawings and texts.
Since the late Sixties Harth had been a driving force in the avantgarde groups Just Music, E.M.T., Cassiber, Gestalt et Jive, Vladimir Estragon, Oh Moscow, QuasarQuartet, Imperial Hoot, Trio Viriditas, The Expats and more.

● ►:When do you start to make your own music?What about your influences?
A23H: I am influenced through some thinkers as Max Bense, D.T.Suzuki, G.I.Gurdjieff and more, and the cultural avantgarde, Beckett, Duchamp, Fluxus etc and Jazz. I am skeptical about the term of one’s „own music“ since music history is full of sampling examples, a deeper net work of traditional aspects and deconstruction, a constant stream of reciproke influences and inspirations. When I began to be creative during the last century I made up a concept of synergy between the genres, between the visual and audio, a concept of synaesthetics that e.g. postulates fireworks, detonations, breaking glass etc as examples of a perfect synthesis of sound & vision that needs to be cultivated in unfolding sliver variations.

● ►:Why choose "JUST MUSIC"as the name of your group?
A23H: „Just Music“ is almost a German expression, meaning music in the moment, nothing else. The name was chosen to express that there shall be no pressure for anything. Just Music also strictly avoided titles for their works to keep the sound creation free from pre-made illustration.
When the Just Music group performed a radio live concert in Prague in 1970 the audience was associating their memories and mixed feelings they had from the Prague Spring which had happened two years before. Such shows that the Just Music created a mirror for all kinds of projections, revolting, poetic, charming, solace etc.

● ►:What's about 23?
A23H: I was born in a year that’s digit sum makes the first 23 in the last century. Since this year the digit sum 23s of each following decade step down a year, so in 1+9+8+5 I chose to design a 23 into my name as a personal artist marker. The following are 1+9+9+4, and with the new Millennium the digit sum has skipped a bit: 20+0+3, then 20+1+2, 20+2+1 and it will end in 20+3+0 for a longer period. I picked up numerology in an early stage. In the I Ching, Book of Changes, the Hexagram 23 is named 剝 (bō), "Stripping". Other variations include "splitting apart" and "flaying“. All those meanings fit very well as characterisation with our momentary cultural situation, especially since postmodernism took course.

● ►:When and how do you start to use records and turntable as the music instrument?
A23H: In the beginning LPs were to transport our works, and I started using them as art objects in the mid 80ies. Since about ten years later I used turntables in the mid 90ies.

● ►:Tell me about Gift Fig.
A23H: It is the name of a duo with the American composer Carl Stone which I founded in 2009 on a New Music festival ROT in Frankfurt. Since then we had several performances in Japan, in Seoul on the dotolimpic festival in 2012 and even a tour in South Africa in 2014, including the Unyazi festival, resulting in two live CDs on the label Kendra Steiner Editions in the USA.
The name Gift Fig is a palindrome and is symptomatic for the duo’s electronic live production. Stone utilizes a laptop computer as his primary instrument where he receives the output of my musical eai actions, transforms these and reads them back to me and the audience.

● ►:What kind of music do you listening to recent days?
A23H: In a daily mood I like to listen to hip hop radio, as a kind of background tapestry.

All compositions by Alfred 23 Harth